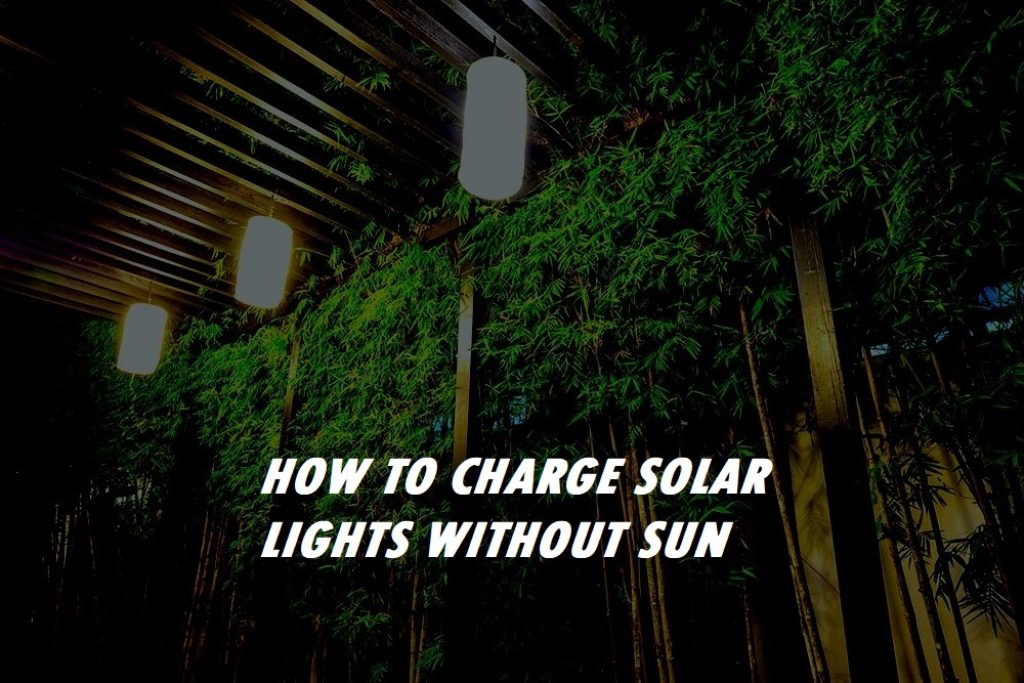 How to Charge Solar Lights Without Sun: Explained

HOW DOES SOLAR RADIATION WORK?

Solar radiation is a very important source of energy. The earth receives 174 Petawatts (PW) of solar radiation and from that 30% of the light is reflected back to space.

To give you perspective, it boils down to 1000W/m2 of energy on Earth’s surface. Some of it is absorbed by clouds, oceans and land masses. The areas which are closer to the equator will absorb more solar energy than areas that are away from it. Large solar panels are set up in areas that can trap the solar energy. So, it is important to have adequate availability of land for setting up solar panels. Alternatively, solar panels can also be set up on rooftops of houses to trap solar energy.

WHAT ARE SOLAR LIGHTS?

Solar light is a device that captures the energy from the sun, stores it in a battery and then finally converts this energy to light through LEDs. In most cases, the power generation or the intensity of the light depends on the size of the solar panel and its battery.

The main reason solar lights work is because of the photovoltaic effect. The other name of the photovoltaic cell is a solar cell, which is the part that converts sunlight into electric current. Now, what is exactly a solar cell? It consists of layers and layers of crystalline silicon and other chemicals, which in turn create multiple layers of negatively charged electrons and positively charged spaces.

There are light emitting diodes (LED’s) present on the solar panel which turns on when the photoreceptor (light-sensing sensor) detects darkness. Thus, the whole night battery supplies electricity to the LED. This photoreceptor stops working when the daylight appears.

We can’t charge a solar panel on a cloudy day as there is no direct sunlight falling on the panel. Then there are areas around the Earth where cloudy days may prevail for a long time or during the season of monsoon. For these situations, alternatives like a special kind of receptor are present, which traps the light and then stores the converted energy inside a battery.

Now as these receptors are very powerful and sensitive, even the slightest and the tiniest wave of ray received from the sunlight can be detected by them. So, we don’t need to worry about whether the sun is out on any given day or not. Even if the slightest light is available, the receptor can detect the wavelength to trap them in the solar panel.

CONCLUSION: The above mentioned are alternatives are some of the ways which can be used to charge solar lights on days we do not have direct access to sunlight. We hope that this will persuade you to adopt solar energy in your daily life. After all, a small monetary investment can reap huge economic and environmental benefits in the future.